I recently returned from a 4-week residency at MacDowell, an Artist Colony in rural New Hampshire. It proved to be an important month in my life, and in my writing career, but not in exactly the way I’d thought it would. I went seeking freedom, but what I found was a lot more meaningful.

Due to my work schedule and household responsibilities, it had been nine years since my last residency—something I tried not to resent, yet invariably did—and I was eager to return to the regimented yet utterly open days I had known in previous residencies, mealtimes being the only structure imposed upon each 24-hour cycle: the promise of bacon and eggs at every breakfast, so long as I arrived before 8:30 AM; lunches with hot soup and homemade cookies, quietly delivered to my studio each afternoon; the cow bell rung for dinner at 6:30 PM, where conversations and wine would flow in equal measure. Happily, these things were exactly the same. What I hadn’t counted on was that I was not the same. 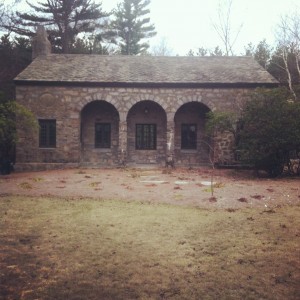 END_OF_DOCUMENT_TOKEN_TO_BE_REPLACED

Lately, I have been writing without inspiration. I am working on several writing projects—two on my own, two with collaborators—and the deadlines are mounting. I write because my writing partner wants me to, or because the deadline is looming. I am not moved to write; instead, I am often forced to write. It is frequently uncomfortable; I feel silly, unmotivated, dumb. I would rather clear the backyard of dog poop, clip my toddler’s fingernails, or make banana bread from scratch. I would rather pick up dirty socks, stand in line at the post office, or read the alumni magazine that just arrived. I would rather go to the gym. I would choose an injury, or worse, the boredom of yoga, over the act of compulsory writing. And yet, when faced with the decision, I always end up sitting down to write. Why?

END_OF_DOCUMENT_TOKEN_TO_BE_REPLACED

Last week, in the first days of Black History Month, a collection of essays written by luminaries in the black community was published. The book, BLACK COOL, is an anthology on cultural aesthetics edited by a national best-selling author, and has a forward written by a Harvard University professor with numerous honorary degrees and awards. The most surprising aspect of all of this is the matter of my own involvement—I wrote an essay that appears in the book. I’ve written two novels, two plays, three screenplays, many short stories, several TV scripts, and dozens of poems in my writing life, but prior to last year, I’d never written an essay. What’s more, I’d never written an essay that I didn’t want to write. But I did. And it got published. I’m going to tell you why.

END_OF_DOCUMENT_TOKEN_TO_BE_REPLACED

Growing up, I knew three things for certain about my father: He was brilliant, he was scary, and he was cool. These were not three separate things; they were one thing with three parts, the lines between them almost imperceptible, like the segments of a banana. He was a poet with a facility for language and an incredible memory—the ability to quote Yeats or DuBois in the middle of an argument, to recite Frost or Auden on the spot, to whistle the entire album of John Coltrane’s A Love Supreme. He was a large man, well over 6 feet tall, and linebacker solid, but he was light on his feet, and strangely graceful for a man of his size. He could walk soundless as a cat, appearing to glide across the room, but when he stood still he carried the weight of a mountain in his frame: we knew he could not be moved.

But it was not size alone that made him scary, it was the intensity of his gaze, how he would get quiet the angrier he got, eventually whispering as he delivered the final verdict, doling out the consequence for our crime of breaking the window with a miss-kicked soccer ball, lighting the quilt on fire, or coming home from the town swimming pool without our little brother. When he was most angry, he wouldn’t speak at all, the funk sometimes lasting for days. Somewhere in that space—between the silence, the brooding, and the brilliance—is where he created the cool.

END_OF_DOCUMENT_TOKEN_TO_BE_REPLACED

Rachel Harper is the author of two novels, Brass Ankle Blues, and This Side of Providence, and several screenplays. She has received fellowships from the Corporation of Yaddo, the MacDowell Colony, and the R.I. State Council on the Arts. Harper is on the faculty at Spalding University’s brief-residency MFA in Writing Program.